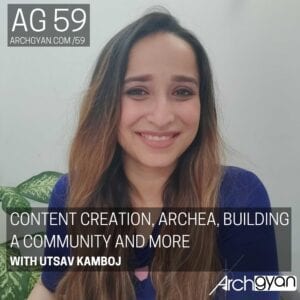 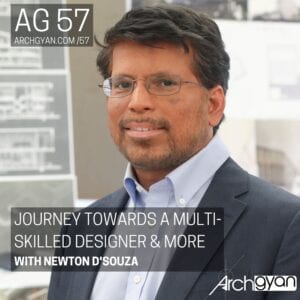 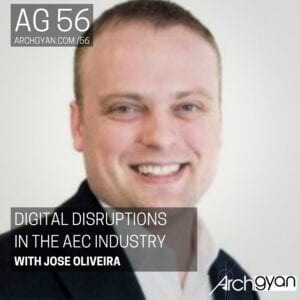 Digital Disruptions in the AEC Industry with Jose Oliveira | AG 56

If you’d like to feature on the podcast or would like to collaborate with us, hit the link below.

In this episode we have with us Architect & Professor Newton D’Souza who is presently an Associate Professor for the Department of Interior Architecture, at Florida International University in Miami.

He’s been part of our industry for more than 20 years & written numerous research papers, special issue journals and books which have been published widely on various platforms. He’s also given various lectures across Universities, and has won various awards for his excellence in the academic side of Architecture. His most notable book is called “The Multi-Skilled Designer” which talks about the unique cognitive thought process of top architectural designers like Zaha Hadid, Daniel Libeskind, Peter Zumthor, and so on and really gives us an insight on the cognitive side of Architecture.

He shares with us his journey into Architecture, his transition of pursuing his BArch in Bangalore to then pursuing his PhD in the states. We then talk about Design, the definition of “Design”, cognitive design, decoding the thought process of an architect, how technology influences the world and a whole lot more.

Journey into Architecture
Newton’s dad being a civil engineer, he had an early orientation into the field. He took up science as his major in college and then transcended into architecture. He was always interested in the pyschology of architecture more than the design aspect of things.

B.Arch at UVC, Bangalore
He pursued his B.Arch in the late 80’s in UVC, Bangalore. Mentored by well versed professors. The highlights of his education were the field trips around India and the NASA competitions.

Transition to M.Arch
After his graduation he started his practise with Zacharia Consultants. He produced number of schematic dwgs for large scale projects. He then went on to work with his father where he handled the architecture and his father took care of the civil work. Back in the day it was mostly hand drafting, the age of computers had just begun and there was a transition in some places. During the time he had a burnout, confused on what’s next. He was stuck between leaving his practice and continuing his education. He then had the opportunity to pursue his Masters in NUS. Getting consumed in the research process of design he went on to do his PhD in the States.

Definition of Design Cognition
On the advise of his mentors he went to the very basics, the principles of design and after a good amount of research he came across the term ‘Design Cognition’-To think, create and solve problems is three words to sum it up. There’s a common time honor principles across various disciplines tangible to design which is the behavior of design. Design is more of problem seeking first than problem solving. Design doesn’t take a linear path , it’s more of putting a puzzle together. Design gets resolved the more deeper you dwell into it.

How do you define good design & bad design
He quotes Mihaly Csikszentmihalyi & Howard Gardner (American psychologist) “It’s like Design, it’s hard to judge who are the more creative people.” . They came up with a framework i.e 1) Domain aspect of creativity(a group of people who define the profession ), 2) Individual subjective people and 3) Gatekeepers in the field ( critics and publishers ). Design then becoming a triangulation of all the three different perspectives. In his book the “The Multi-Skilled Designer” he sticks to the experiential richness to design, where designers who are consistent with functional, creative and experiential aspect to design brings recognition to good designers.

With the use of technology can you hack design, making every single output a good design?
Newton gives us insight on what differentiates well known architects from others. He takes an example of architect F.L.Wright, designing roughly around 800 buildings, and refining his design through the process with experience and knowledge. He then goes on to say that one doesn’t have to be gifted to be a good designer. Visualisation of a project takes the design a long way. Design being subjective, develops over time for an individual. He then goes on to talk about technology and how it boosts the potential of design but at the same time the authorship of design becomes questionable. Design has moved away from an individual designer to a more collaborative profession

Design not only a product but a breathe of life and philosophy
Newton says that he looks at design as a way of thinking , a way of framing the world. He says that we’re so solution focused designing for the future but neglect the analysis that occurs during the process. Contribution of designers to urban planning. Representations produced by designers speaks volumes bringing new insights. He then brings to the table social change and activism. And how design can have an impact on the same.

Future of design with AI
He says futurists question the need of designers after AI has come into the picture. How machine learning evolves learns and develops it’s own intelligence perfecting a design over time. He then goes on to say that as humans we make mistakes, and those mistakes have created notable designs over the years. At the same time he says designers need to start learning to code at this time and age. He says instead of using computers as an aid to design , it should be used as a part of how you design. In that way as designers we can retain the playfulness, the creative thinking , the human touch it provides.

Technology governing the way we live thereby affecting our characters and changing design
There’s a paradigm shift in the way we operate , being not tangible. The multi sensory experience is being lost with screens. Design has always been about space and the 4 dimensions. As designers we find creative ways to adapt to this new era. A continuum between the virtual and physical experiences , reconceptualize design. There’s a radical difference in the way the new generation think, function and communicate which plays a huge role in design.

Need for Architectural Education
He says that Architectural education is a long term investment. Skills can be obtained only with practise but critical thinking, empathy, social activism, collaboration, creative confidence can be achieved in college. He then says that architectural school is a good place to fail and you can afford to as well unlike the real world where there’s an economic and social investment.

Future of architectural education being a hybrid of online and classroom.
He says that the whole covid era has embraced the online version of education. Although many professions have adapted an online wok system, architecture has traditionally always been more of a hands on experience. There are limitations and challenges in a remote environment. But as the same time opening the door to new opportunities. Even though you cannot replicate the things done in a physical environment into a virtual environment, one has got to see the affordances of remote environment.

Future Goals
He’s currently working on a research paper for a conference at Israel. It’s called ‘ what design is not ‘. His other goal is to work with technology and design making it more accessible to marginalized students.

Advice for students and young architects
Newton says learn working with ambiguity because that’s what defines design. Even though we need regularity and structure , we’re still in a swamp so embrace it. There are days there are failure and the only thing that keeps you going is endurance.

The Multi-Skilled Designer by Newton D’Souza

Click here to listen to our top episode on Archgyan

The Archgyan Podcast is sponsored by our Courses. Sign Up Now to start your Architecture & Interior Design Journey.

If you’d like to support our show and listen to more enriching architecture episodes, feel free to donate to https://paypal.me/archgyan

By continuing to use the site, you agree to the use of cookies. more information